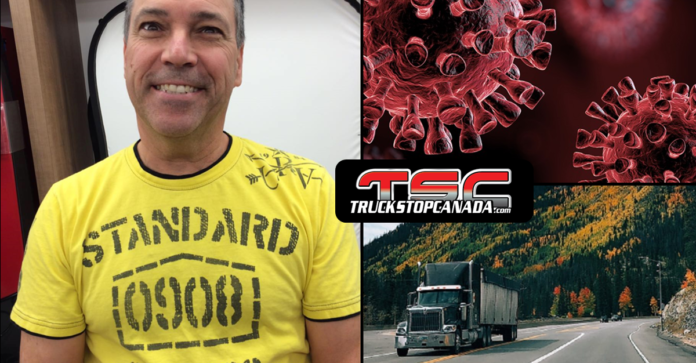 While the obligation to wear a mask has aroused strong reactions in many people around North America, for Pierre Bernier it has become obvious for him that we must protect ourselves and avoid contracting the new coronavirus. Trucker, he faced the disease and although he comes out with any sequelae, he shares with us today his experience, highlighting the problems that the virus can cause for our health, but also for the finances!

As a long-haul team driver, Pierre contracted the virus at the end of April. He felt a tingling in his throat, nothing more, never thinking he had contracted the disease. The first days were banal, but it was on the fifth day that he understood the brutality of the new coronavirus on his health.

« I had a fever and I was really weak; I dropped about 50% of my usual capacity. I would go up a flight of stairs and I would be drenched in sweat…» he explains. « I contaminated my codriver, even though we were already incredibly careful. We cleaned everything in the truck, we would disinfect our hands regularly, but he still contracted the virus. The virus had affected him much stronger than me, even though he had a perfect bill of health, while I have lung problems. »

« I think I must have caught the virus when I went to the ATM. I did not have any disinfectant with me at the time and I had told myself that I was going to wash my hands at home, but I may have forgotten, or I may have touched my face with my hands… But I find it important to mention that I did not catch the virus in the United States, I contracted it in Quebec City, even if my symptoms appeared on the road. »

« I do not believe that truckers are more important vectors of the virus than the general population of Canada. The rules are strict, whether it’s at the borders or elsewhere, and we were incredibly careful not to spread the virus… »

Pierre and his codriver were incredibly happy when they returned from their trip, being both exhausted. Upon his return, Pierre made an appointment and he went to a Covid-19 clinical drive-thru at Place Fleur-de-Lys. Well organized and equipped with special medical gear, the people there gave him the test and he turned out to be positive.

« Coming back from our trip, we left the truck and all the travel documents as is. We didn’t go inside the office; we went directly home, and the company took care of disinfecting everything. In fact, they disinfected the truck three times! »

« Personally, I was sick for about 12 days, and I was released on May 11th. My son, who stays with me, did not contract it, but he stayed confined with me, so he doesn’t contaminate his fellow colleague’s as for he is in the military.  I cleaned absolutely everything I touched, even the bottle of milk, we were very careful. »

When Pierre received permission to go back to work, he had to leave without his partner. His codriver did not return to work until the 12th of June and is still suffering from the aftermath of the Covid-19.

« Even if you are in your forties or fifties and even if you are in good shape, you can be sick like hell! In his case, it’s as if the virus has attacked his brain. When you no longer know if you are moving forward or backward, you are extremely tired, you must sleep more than ¾ of your day, it’s really serious. In my case, when I got up in the morning, I had to clean my sheets because they were soaking wet. I was making myself lunch, and it really took all my energy. What happened to my codriver was really bad. »

Although Pierre is in favor of sanitary measures, he deplores the lack of consistency in the measures from one state to another, from one client to another.

« For example, California asks you to wear a mask. You arrive at the shipper, who asks you to use your own pencil, but the person at the reception takes my driver’s license and touches it with his hands. When I got tested, they never touched my health insurance card, they put it in a bag! » he says. « There are states that require to wear a mask, others do not. In Michigan, it’s a 500$ fine if you don’t respect the measures. There is no consistency from one place to another … It’s complicated! »

Pierre believes it is important to follow the sanitary measures in place. Even though he has already contracted the virus, he continues to pay attention to others.

« The purpose of sharing my story is to remind people of the importance of washing their hands and wearing a mask. Even though I did well, I was fortunate to be able to make my payments, to pay my mortgage, because the virus involves a long work stoppage. People who have the slightest financial difficulty, who impatiently wait for their pay to make their payment… How will they manage if they have to stop working for weeks or even months? »

« I think eventually the viral load will lower, and it will become like a little flu. But this isn’t the case at the moment, not for everyone, so let’s be careful! »

The company Pierre works for has only two other cases of infection out of nearly 500 drivers. He is pleased to tell us that the company is doing everything it can to limit the spread of the virus and that the situation is being taken seriously.

The obligation to wear a mask or face covering in closed public places in Quebec will come into force next Saturday, July 18th, 2020.

Remember that masks do not fully protect the people who wear them, but they can reduce the risk of contamination to almost 5% if others wear them too. Wearing a mask or face cover helps retain particles released into the air while exhaling, speaking, coughing… and therefore creates an additional barrier to the virus if you were a carrier.

Wearing a mask or a face cover could allow the population to continue to go out and spend their money, for the good health of our economy, while surviving the virus, physically and financially…

It remains unclear why some people appear to be more affected by Covid-19 than others. While people experience little or no symptoms, others, relatively healthy, are fully affected, and some die. As a reminder, the trucker community has lost some of its important members due to the Covid-19. Let us not forget them.

Peterbilt for the first time showcased its SuperTruck II

Bullying in the trucking industry; are you a victim?